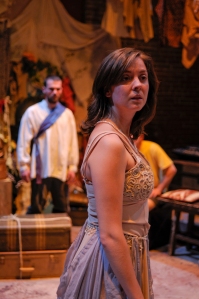 “Even in the uniformly strong cast of this “Trojan Women,’’ Aimee Rose Ranger (“Fen,’’ “Recent Tragic Events’’) stands out. Ranger persuasively inhabits four very different characters: Athena, the haughty goddess; Cassandra, the half-mad prophetess; Andromache, the grief-torn widow; and the wily Helen…One example of Ranger’s astonishing versatility: First, as Andromache says goodbye forever to her child, the actress transfixes you with her depiction of a mother in a state of utter devastation. Then, mere moments later, Ranger transforms herself into the slinkily seductive Helen. ~ The Boston Globe

“Aimee Rose Ranger rules the stage in all four of her roles. She is clearly doing what she is meant to do. As Athena she is spiteful and conniving. As Cassandra knowledge leads her to insanity. As Andromache she brings us to tears with a mother’s pathos. And, as Helen, Ranger truly soars, exuding sex and guile throughout her amazing performance. ” ~Boston Area Small Press and Poetry Scene

“At its core is Val. As played by Ranger, Val comes across as hopeful despite recognizing her own despair.She evokes realism and optimism. If Val had been too naïve and cheerful, she would have seemed out-of-place; and if she’d been too aware of her life’s futility, the play would have been too depressing. Ranger keeps the levels even, sometimes with a simple gesture or a slight crook of her lips.” ~Dig Boston 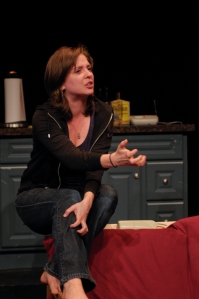 “One of the best acting performances of the year by lead actor Aimee Rose Ranger.” ~ New England Theatre Geek

“Art imitates life with the casting of the luminous Aimee Rose Ranger in the role of Waverly. . .The role requires the actress to walk a tightrope between dread and denial, and Ranger portrays both aspects with aplomb.” ~ Broadway World